Why there’s never been a better time to be a Doorpreneur! 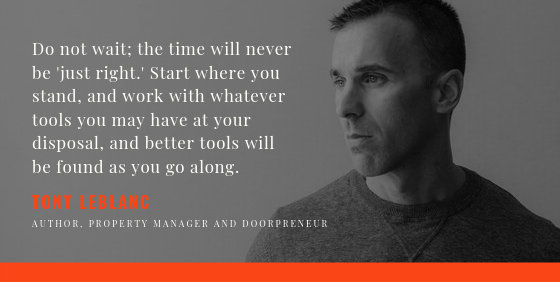 North Americans are on the cusp of a massive change in the kinds of accommodations we choose to call home.

Essential lifestyle changes within two of the largest population groups in both Canada and the United States are pushing more and more people into rental properties as opposed to opting to take new mortgages and invest in the care and maintenance of a purchased property.

Two factors are pushing this shift in cultural thinking.

The first is the aging of the baby boomer generation. The second is the rise of the young millennial generation.

Meanwhile, the United States Census Bureau estimates that by 2029 in the US, more than 29% of the population will be over 65 as their baby boomers retire.

This aging generation is already consistent with a growing demand for smaller housing units and for apartment or condominium units in both countries, especially in walkable neighborhoods.

In the title of this blog, I said this would create great advantages for the Doorpreneur.

A Doorpreneur, if you are unfamiliar with this term I invented, is an entrepreneur who takes his or her property management business and adds one or more service company such as landscaping, cleaning, maintenance or sales and successfully grows beyond the rent roll.

In short, they use the property management firm as a springboard to establishing an entire business network that moves from private clients (property owners) to public clients (the general public).

To learn more, you can pre-order my new book, Doorpreneur – Property Management Beyond the Rent Roll now at https://amzn.to/2lUTlf1!

So moving back to the changing trends in how we live, for baby boomers who opt to stay in their own homes, there is a growing demand to purchase additional services to assist them in making that possible.

That sets the stage for using the essentials of your property management business to grow spin-off companies to meet that demand as well.

The other significant population pushing change in the housing market is the millennials, which represent 9.8 million people in Canada alone, the largest segment of the Canadian population. Their youth suggests they will also dominate trends in Canada’s foreseeable future just as the baby boomers have done for three decades.

In the United States, there are just over 75 million millennials, making them the largest generation in US history.

A report from The Urban Institute gives insight into the kind of influence millennials will have on the housing market in the future. For example, they tend to marry and have their children later in life and become homeowners later. The millennial homeownership rate in the US was 37% in 2015, approximately eight percentage points lower than the homeownership rate of Generation Xers and baby boomers at the same age.

I have personally witnessed examples of other trends outlined in the report about the millennial generation. They are heavily focused on the so-called sharing economy and as a result, are comfortable living under one roof with many other tenants in apartments.

As well, their fondness for living in high-cost city centers where they can walk to work and to restaurants and clubs to meet their friends contributes to making them less keen on purchasing a home in the suburbs as soon as they start to secure a regular income.

As well, in the current “gig economy,” where more and more people work from contract to contract instead of securing full-time, permanent positions, millennials often feel their income is not as secure and they are less inclined to want to make long-term commitments like home purchases.

They don’t even want to be tied to a specific geographic area because between gigs, they want to go out and see the world, and they leave not being sure they want to come back.

All of these trends are fueling a growing demand for apartment living and that in turn means a growing need for good property managers and the associated businesses that they can train their staff to provide.